Home Topnews THE SECRET OF MY SUCCESS – Boats full of linen photographed...

Reaching the milestone represented by this evocative image required starting from some essential certainties. Tourists in Venice, for example. Tourists which, regardless of the economic crisis, continue to visit the world’s most dreamed of city, as confirmed by the ten million visitors registered by the APT of Venice (Tourism Promotion Agency) for the year 2013.

Three years ago, Francesco and Manuel Ventruti, father entrepreneur and son fresh out of college with a degree in Business economics and management from the Catholic University of Milan, started from this situation to plan and establish Venice Laundry, better known as Ve-La, an industrial laundry born under the star of success.
In fact, Venice tourism means accommodating facilities and, consequently, large amounts of linen and table-linen to be washed and changed constantly. Theirs was an intuition destined to embark, with Ve-La, on an adventure born with the wind at its back, as suggested by the 2013 turnover of about 4 million euros and the one hundred employees, both full-time and seasonal, working at the operational headquarters in Casale sul Sile, in Treviso Province, and the Torre di Fine facility (near Eraclea) in the Venetian area. This in addition to the growth prospects related to an upcoming upgrade of the Casale sul Sile facility, for which the design and financing are ready, where the entire production will be concentrated by spring.

Ve-La has also achieved another important result in setting up its executive headquarters in downtown Milan. “Not just because we’re from Milan,” explains Manuel Ventruti, the 25-year-old CEO of the company, “but also because the century-old historical and economic ties between these two important cities will soon be strengthened by the Expo, the world fair which will attract millions of visitors to Milan in 2015.”
“And this will clearly have positive repercussions on Venice,” continues the young CEO, “given that the Expo will set up its venue completely centered on the theme of water right in the Venetian capital. Even more reason to expect significantly higher tourist flows along the route connecting Milan to Venice.”
Great intuitions are one thing. But realizing them with appropriate strategies and investments is another. In that sense, Ve-La immediately had all the right ideas. As Manuel Ventruti explains, “What really moved us into the market was a clear fundamental choice. In other words, deciding to give up on the price war and focus instead on service quality: washes characterized by absolute excellence, strictly prompt and timely deliveries, constant and personalized relations with clients, starting with the implementation of a toll-free number for assistance, which immediately proved to be spot on.”

To understand the benefits reaped from this company policy, just scroll through the list of clients, impressive for both the quantity (about 350 businesses) as well as the quality, certified by hotel names that have made tourism history in the Venetian Lagoon: Cipriani, Rialto, Canaletto, Splendid Venice, Acqua Palace, and Palazzo Giovannelli. And this list of “fixed” hotels is broadened to include a “self-propelled” one of exceptional prestige, the Orient Express, a historical train that has been traveling through Europe since the end of the 1800’s, now served by Ve-La along the Venice-Paris stretch.

“We are clearly satisfied with these first three years of business,” explains Manuel Ventruti, “and at the same time we’re cultivating even greater ambitions, related to our presence throughout the territory. This means promoting loyalty among new clients in Venice, but also in Jesolo and other tourist locations along the Adriatic, destined to have increasingly close ties with the capital considering that growing numbers of visitors can no longer afford the rates of Venetian hotels.”
And the CEO continues, “One of our objectives is to intensify our business on behalf of third parties, negotiating the use of our machines and services with many small artisan businesses local to the area in which we’ve settled. Just as we consider important the joint-venture concluded with another Venetian brand like Vad, an Italian leader in hotel supply.”
In a year it will be time for the Expo.
A time for changes. Which, under the bridges of Venice, Ve-La ushers in with its boats packed full of linen. 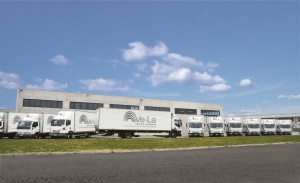 EXPOdetergo International 2022, is ready to welcome you!

Guidelines for the professional spotting treatment