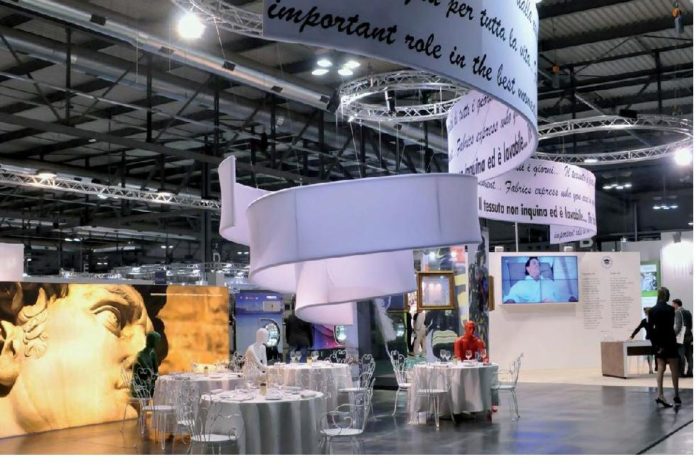 The 17th international trade show at the Milan Rho fairgrounds offered over 20,000 visitors a cross-sectional view of an ever more lively and varied sector in which synergies, areas of interest and objectives multiply: from a record number of shirts ironed in one hour, to the “conversion” of military technology into laundry technology. It showcased a multitude of wonders worthy of Guinness World Record recognition for savings and environmental safety, as further explained in the 10 points below. 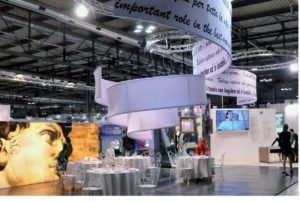 One hundred shirts ironed in one hour. Dress jackets painstakingly spot-cleaned. Washers with 125 kg load capacity that quietly convert and take advantage of anti-vibration solutions designed by the ballistics industry to transport explosives. Machines that “magically” erase a single spot of dirt without affecting the rest of the garment. Dryers that compete on energy-savings. Operating systems intelligent enough to neutralize even the “greasiest” and toughest types of stains.
All clearly true and possible by the key words that describe it: “Clean everything better and increasingly faster”.
This was the message at the stands of the 17th EXPOdetergo International event, held from 3-6 October 2014 at Fiera Milano-Rho.
It truly was a four-day global summit for the dry cleaning and industrial Laundry sector.
A fair like those in fairy tales, so filled with unimaginable wonders that  its attendees still talk about it at their homes, at their companies, in their marketing offices and advertising agencies.
Tongue-in-cheek, it was the fairest of all fairs. The event turned out to be so precious for all laundry sector operators that it should by all rights be called “Fair”, with a capital letter. Unlike the vanity fair of the famous 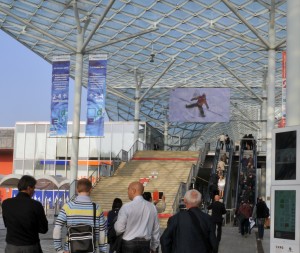 18th Century English romance, this “Fair” clearly showcased the technological and commercial excellences that characterize the uniqueness of an ever livelier, eclectic and forward-thinking sector.
The attendance by more than 20,000 visitors proved the merit of EXPOdetergo International, an event that radically and permanently changed the outlook of laundry, and handsomely rewarded the commitment and efforts of those who organized it with the support of Assofornitori (Associazione Fornitori Aziende Manutenzione del Tessile – Association of Textile Care Company Suppliers).
This is what drives us to tell you a condensed story of our “Fair” over the course of 10 enlightening points. Information regarding individual machines and products can be found in the extensive special article dedicated to the Milan expo and published in this same issue of Detergo. 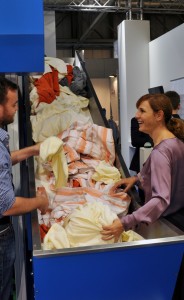 1) Water – This is the “gold” around which the entire world of laundry has always orbited. Water has always been a fundamentally important, primary energy source for industrial laundries and over time it has come to play a key role for “dry” cleaners as well. At EXPOdetergo International 2014 the attention of many visitors was captured by the ever more ingenious and efficient laundry process water recovery methods. The biological and chemo-physical systems are the best suited to recycle water but also entail operating and start-up costs that vary according to the volume of water discharged over the course of a regular workday. Moreover, they require having adequate installation space for the framework, and therefore are best used in spaces already designed to house them as part of the plant original layout.
2) Surgery – Or rather, “major surgery”, conceived according to the procedures of nearly infinitesimal “local” anesthesia. This is not a fanciful notion considering the effect produced by one of the most striking wonders at  EXPOdetergo International, a machine designed by an Italian company to perfectly clean by either dry or wet methods only the stained area,  therefore saving energy and fully protecting the garment at the same time.
3) Philosophy – Yes indeed, because “Natural Cleaning”, which is now part of the 20th Century common vocabulary, is a healthy work philosophy.   Among the best practices of a community that believes in protecting itself and its Environment, Natural Cleaning has naturally established itself in the ecologically crucial environment of laundry. EXPOdetergo International 2014 showcased it through innumerable examples, spanning from cutting-edge natural solvents to a variety of cleaning solutions focused on key environmental factors such as biodegradability, hypoallergenicity, and biocompatibility. 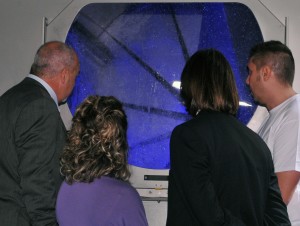 4) Frontiers – Intended as new frontiers. A more “global” EXPOdetergo international would have been hard to imagine even last year, starting with the increasing presence of African operators at Rho. Then again, recent photos of laundry containers bound for work camps in Africa did circulate worldwide. Countries like Mozambique are implementing wide-ranging economic growth plans that evolve around primary resources such as water, to be distributed by aqueducts connected to industrial laundries (like the one of Maputo). On one hand the plans will create jobs, and on the other will tangibly improve the infrastructures and the population’s standard of living. China, whose economy is increasingly leading the way worldwide, was not as newsworthy in this respect because – as further confirmed by EXPOdetergo International which is viewed as a not-to-miss event by important trade associations such as the “China Entrepreneur Club” known as CEC – China has firmly committed to incentivize sustainable economy projects, which also encompass the industrial laundry sector. 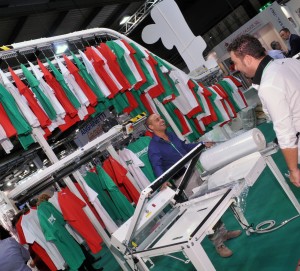 5) Future – Which specifically means alternative solvents in line with the general belief, also demonstrated by the well-attended convention held during the exhibition, that the future of the laundry supply chain lies in its ability to offer ever more numerous and differentiated alternatives to the PERC “mainstream”. Fundamental indications are being received from many fronts: from national markets where PERC has now been banned, recent research on extremely delicate whitening gases like ozone, and the increasingly real possibility of using a wide range of alternative detergents and biodegradable materials.
6) Guinness World Records – Nothing but the Book in which world records of all sorts are registered every year could more fittingly describe the last EXPOdetergo International, where wide-eyed visitors stared in amazement at seemingly infinite “wonders” such as the machine made in Italy which washes, removes stains, dries and presses garments so they look brand-new. A patented product that is making its way around the world. 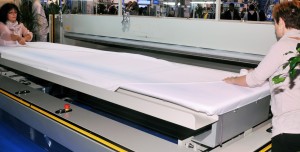 7) Omnipotence – The commandment “clean everything and better” has now become part of our daily lives although not strictly in reference to “garments”.  We’re talking about an all-encompassing vision which naturally leans towards “omnipotence” (on earth), manifested by the 21st Century laundry. It is one of the primary lessons to be learned at EXPOdetergo International 2014. The stands brilliantly displayed the latest products, ranging from mattresses, camping tents, fireproof suits, motorcycle helmets, gym bags, and toys not necessarily destined to lie among other memorabilia in the attic. According to the now widely established and common mindset, the future holds financial hardships by which preservation (even by washing and cleaning) will be just as important if not more important than consumption-acquisition.
8) Safety – The term has two connotations. One is internal safety, which pertains to laundry workers. The other is external safety which pertains to the surrounding Environment where people reside and live, and which must be protected from all sorts of pollution. In this regard, reference should be made to the text published by the Dipartimento Igiene del Lavoro (Occupational health and safety department) of Ispesl,  (“Guidelines for the management of biological risk in industrial laundries”). It calls everyone’s attention to the fact that the industrial laundry sector, by virtue of its 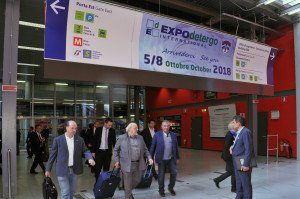 size and diversified scope of work activities, can be considered “a complex system, not to be underestimated in the approach to risk management”. Considering the increasing number of employees in the industrial laundry sector, we should further discuss the issues pertaining to the safety and operating limits of  systems and technologies used by it as well as “define accurate technical and behavioral guidelines by which to ensure, in compliance with the prevailing  regulations, the achievement of suitable level of hygiene as required in order to meet the objective of lowering contamination of the garments and avoid their recontamination while protecting the worker at the same time”.  Those visiting the stands at EXPOdetergo International easily perceived this as being part of the deal.
9) Synergies – There can be no future, especially a good future, for any of us if we fail to promote mutual understanding, alliances, and new sharing models. That is what the famous synergies are about.  The EXPOdetergo International 2014 laundry industry expo could inspire a book on the subject, starting with the sensational and righteous “pacifistic” conversion of a shock absorber, originally designed to eliminate dangerous vibrations during the transport of explosives produced by the ballistics industry. Thanks to the crucial contribution of the Pordenone Technology Center, this patented technology has now been successfully applied to the drum of an impressive washer with 125 kg load capacity made by an Italian brand, which is now conquering the world at “zero vibrations”.
10) Savings – This is a noble and reassuring competition where large and small companies in the global laundry industry do their best to eliminate waste, reduce energy consumption, and promote a long-term use mentality rather than use and toss. EXPOdetergo International 2014 proved this several times over, starting with the crowning achievement of a large European company, a fabulous dryer which saves 15% more energy than previous models.

EXPOdetergo International 2022, a point of reference for the international textile care market