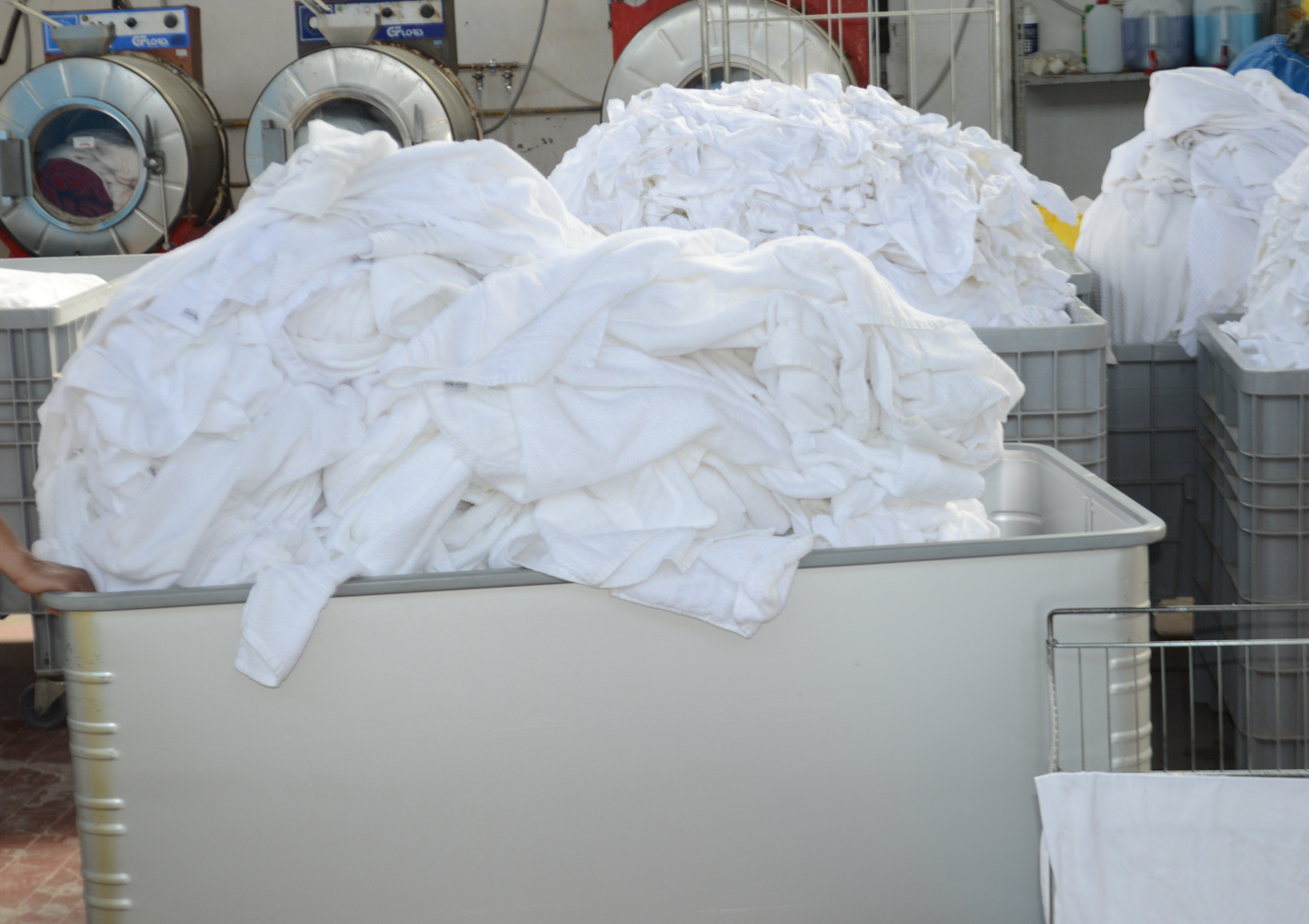 It hosts a TV crew, it dresses soccer teams, it emulates Amazon when it comes to goods pick-up and delivery and it has made part of the “Soliti ignoti” Raiuno TV show. Such is the style of its owner, Francesco Macone, who started working at this industrial structure when he was 13 years old, and today, he hires thirty employees to service more than 120 structures, hotels and restaurants

How many smiles at Gaeta when four years ago, during the evening show called ”Soliti ignoti”  (“The Usual Unknown”) on Raiuno national TV, a participant was asked to guess what the occupation of Francesco Macone was.

On 6 November 2017, in the evening, in this nice Tyrrhenian town in Latina province, even the stones, if they could speak, would have given the host of the TV program, Amadeus, they right answer choosing from the options given right next to a man’s face in the close-up. They would have said that this man does not cut hedges for a living, he does not sell the Provolone cheese and neither is he the owner of a driving school. All those hypothetical answers were obviously unimaginable for those who knew that the only laundry servicing more than 120 structures such as hotels, B&B and restaurants based in Gaeta, Sperlonga and on the Isle of Ventotene, is the Laundromat laundry owned by Francesco Macone since 2006. Today, the laundry hires thirty employees who work at the lab and manage the delivery points.

On the other hand, even if the participant did not come from this evocative part of Italy, a town on the border between Lazio and Campania, after having examined the photo thoroughly and after noticing that the person on the photo was wearing water-resistant shoes, typically worn in wet work environments, he gave the right, 30 thousand euros worth answer, saying that the man’s job was “washing carpets”. “Is it written on my face? Is it so clear that I run this kind of a business? – says Francesco Macone, 40 years old. – Still, if the answer was yes, it would not surprise me because me and the laundry have become a single thing ever since I reached the age of reason”.

“For the record, I was only 13 – he says – when I started working here in summer. I helped the driver of the van distribute the linen, pick it up and deliver. Back then, I was hired by the owner, Vincenzo Di Sarcina, who had founded the place in May 1968 giving it an American name not by chance. His first customers back then were the American military from the U.S. base in Gaeta”.

“Since the very first moment – the entrepreneur continues – I have felt as if all the sounds, colours and smells of that place belonged to me. The laundry became the choice of my life. Once I became of age, I started working full time there. Then, when the right time came, I took the business over from Vincenzo, who has always been a real teacher to me. Still today, I consult him about the business choices in regard to the Laundromat”. 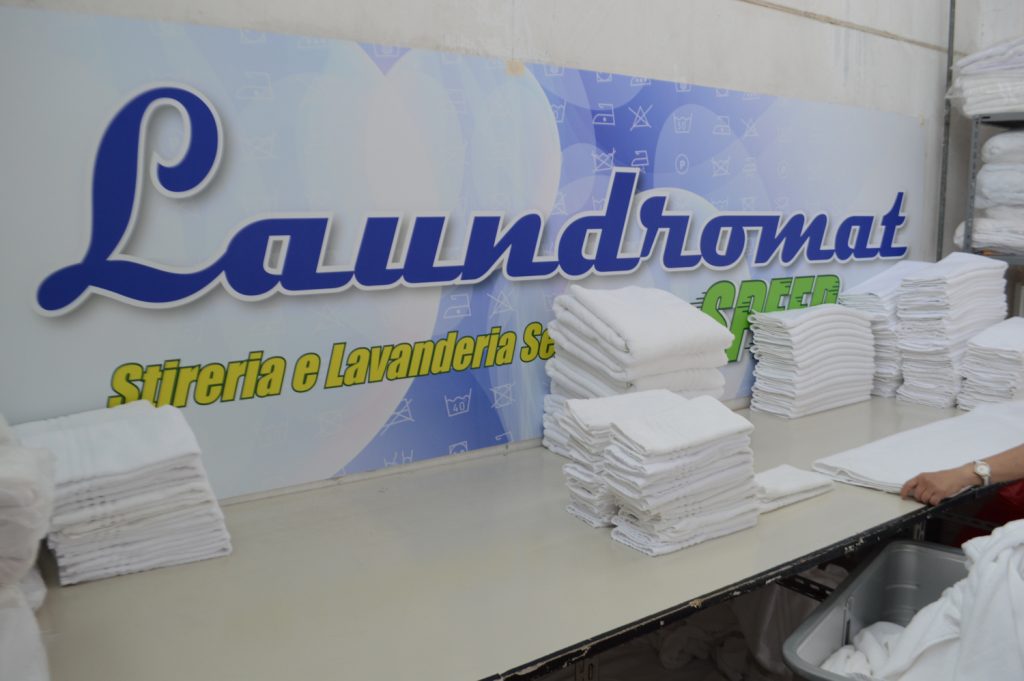 At this point, it is as if we came back to the close-up photo presented during the Raiuno TV show. A photo of an unknown carpet washing specialist who was quickly perceived by the Raiuno TV show authors as an “exemplary” laundry businessman in regard to textile care in the first twenty years of the twenty-first century. “Do we want to speak about the very beginning? – asks Macone. – When I purchased Laundromat in March 2006, the economic crisis was fully in progress and I had to deal with quite strict customers, so to say. They were really careful about the prices without paying too much attention to the quality of the services. It was not their fault. It is the business sector that also in Gaeta and around seems to be surviving today only due to the continuous lowering of the prices for laundry services”.

“Whereas I have stayed faithful to my principles about the market price that relates to the quality of the service. Facts have proved I am right – reveals the businessman. – Today, the Laundromat is the only industrial business activity of reference for the entire territory where customers have grown, in every way, together with the laundry that has reached a production of four tones of linen per day on average. This is possible thanks to a precise organization. I personally take care of the continuous business relations that are at the base of the loyal relationships with customers. My wife, Flavia Chinappi is in charge of the company’s administration while my brother, Salvatore manages the machines and he supervises the personnel”. 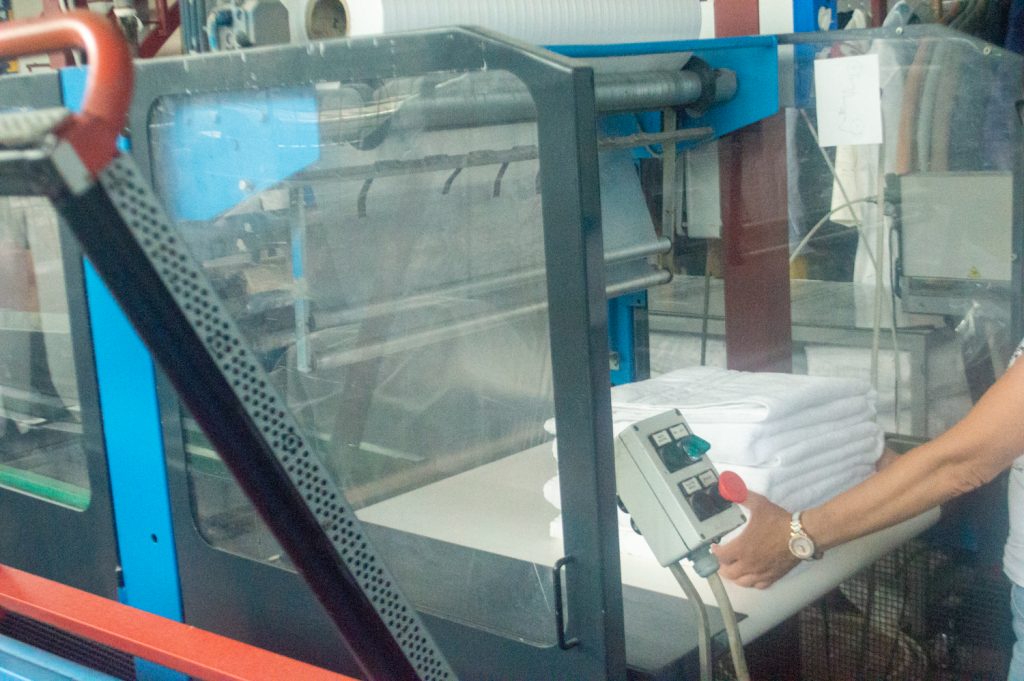 “Let us make it clear that quality cannot just be invented out of nothing – the owner of Laundromat explains. – It is necessary to obtain it from an everyday, hard work. We can see it in our work lines composed of washing extractors: a 200 kg washer and two 100 kg washers, a 50 kg washer and another 30 kg washer, three 15 kg washers and two ironers. In this way, every linen item has got a precise destination. It is folded and sorted by two employees who deal with garments with that special, artisan care, unknown to any machine. Please tell me if that is not an important factor for a restaurant that will show their table cloths while serving food to clients, or to a hotel room where guests immediately pay attention to the type of the hotel linen to their disposal”.

“As a matter of fact, – reveals Francesco Macone – last generation restaurant and hotel owners won’t just come to you because they simply choose you. They will choose your business on the basis of the offered services and because of the absolute accuracy and reliability you need to guarantee. Let me say more, we need to go look for the customers, perhaps learn something from Amazon, too, just like I did”. 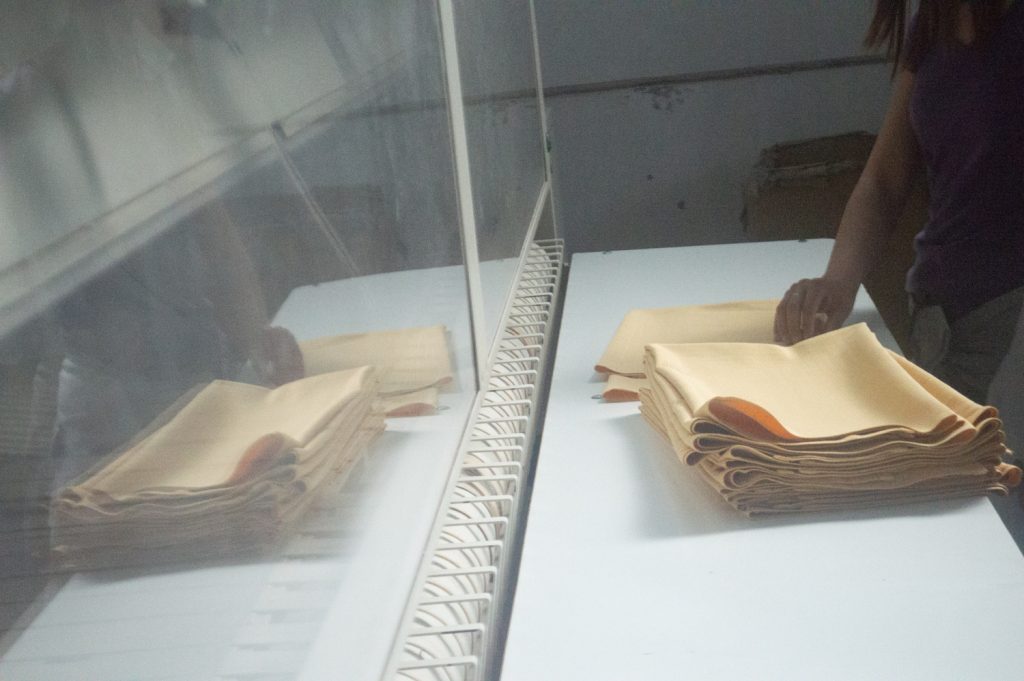 The comparison between industrial laundry and the “omniservice” global market player is actually quite stimulating, and Macone goes deeper into the matter: “Just like Amazon, at Laundromat we use warehouses and means of transport that we use to reach all the businesses in the territory. Here, we do not only work with big hotels where we need a van to deliver linen but there are many small restaurants where it is enough to use a small three-wheeler, an Apecar or a Doblò to reach places like small, two-room bed & breakfast structures based in beautiful places that are not easily accessible at times. We often use a motorbike to reach them. Surely, the small Isle of Ventotene was some sort of a training moment for us. The hotels and restaurants on the isle take a space equal to four football pitches where all the structures are concentrated one next to another”.

The important thing is not to stop, says Francesco Macone, who is understandably proud of the dynamics that their simple and elegant company logo expresses. It represents three water drops in a constant movement. The logo was created by a graphic artist Antonio Romi and it was published by Nicola Di Liegro. The logo appears on the shirts of the Laundromat Gaeta Futsal team. The team is going participate in the next C2 series championships, “because in 2021, a company needs to present itself as a living presence – explains the entrepreneur-president Macone – that contributes to the development of the local territory, in this case, by being involved in the youth sports team”. 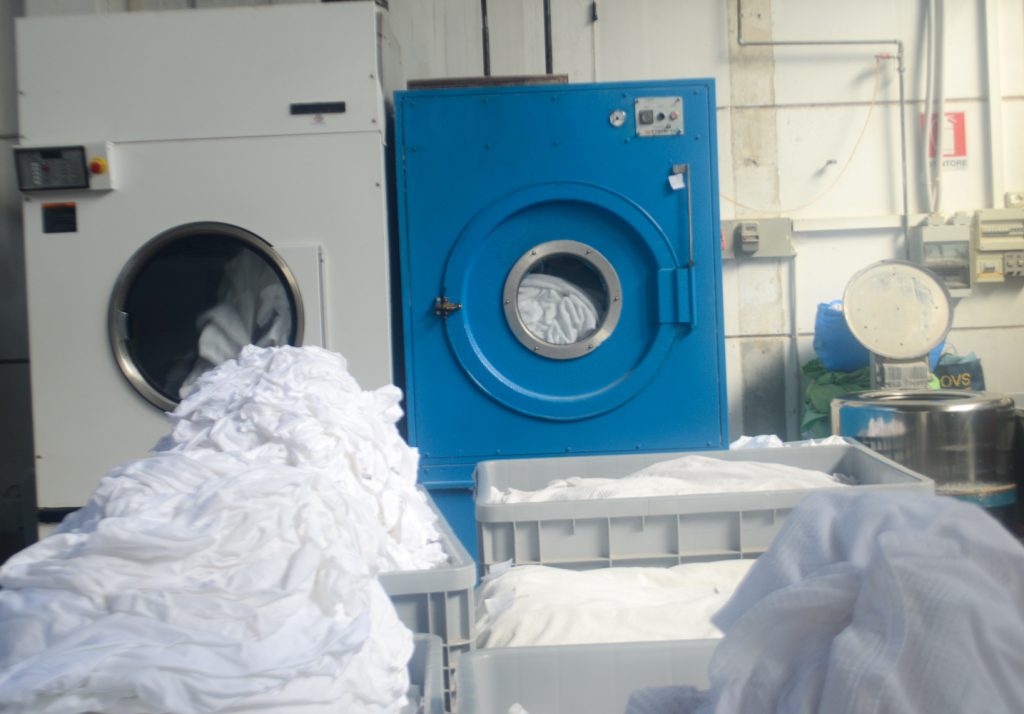 As you could have imagined, it is not allowed to push a brake pedal when it comes to the numerous ideas of Mr. Francesco, who is also very proud of the successful “delivery” service launched last year through an app. Customers can manage the linen pick-up and delivery using the app without having to go anywhere. “I once read in Detergo magazine that a laundry had become such a melting pot of lives and experiences that it actually became a TV set – he reveals at the end with a final twist – so I felt I was right as I already shot two pilot episodes of a show at my Laundromat, inspired by what one can find among the sheets of a hotel room… … The project has been put on standby for the time being, but who knows if perhaps we will restart working on it one day…”. 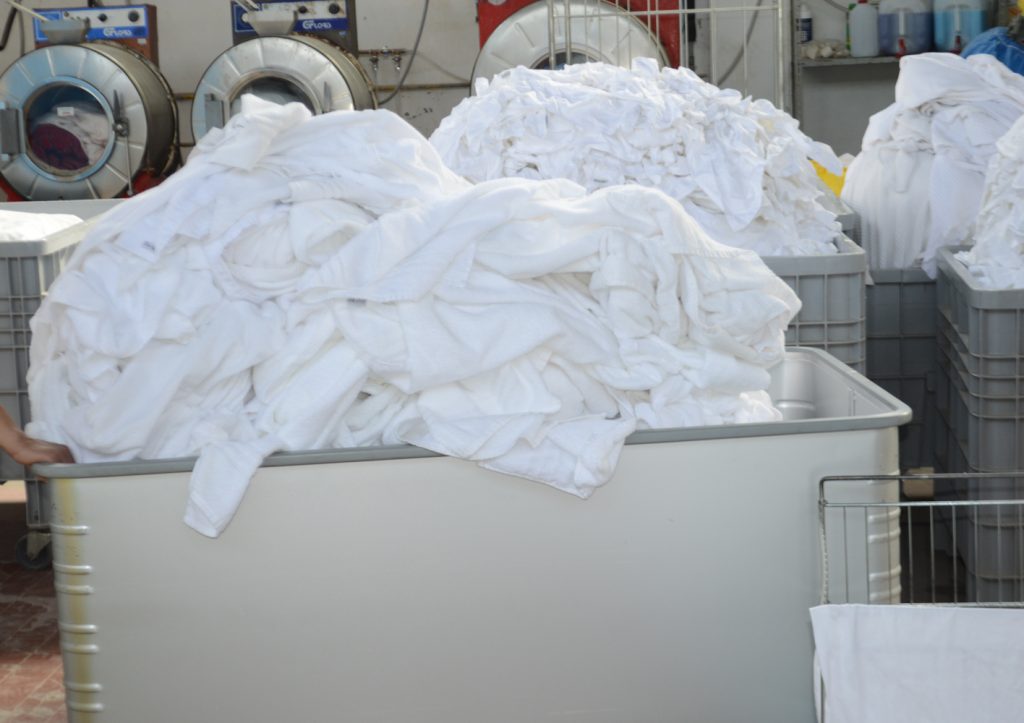 Spectacular and inexhaustible, Francesco Macone concludes: “I once read in Detergo magazine that a colleague launderer, who wanted to better communicate the sense of his work to customers, invented a slogan that said: We are the time that you don’t have. Since that day, it has become mine”.

ITALIAN TALENT – Lindosan, the company mission is called “The Beauty of Puglia”

ITALIAN TALENT – Colombo Dry-Cleaner’s, not a miracle but a business case of the XXI century